Zootopia is a movie from Disney Studios : it tells the story of the optimistic and fearless bunny (Judy Hopps). She discovers that realize his dream (being the first bunny on a police force of big, tough animals) isn't such easy.
Zootopia is the fourth animated film in the history of cinema to spend one billion dollars for production. He won the Oscar for Best Animated Film of 2017.
Discover these coloring pages with all the characters of Zootopia. 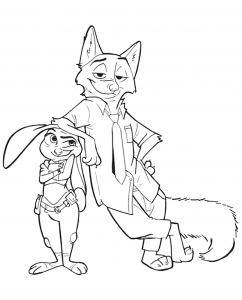 consequat. lectus adipiscing eleifend Donec elit.
This website or its third-party tools use cookies, which are necessary to its functioning and required to achieve the purposes illustrated in the cookie policy. If you want to know more or withdraw your consent to all or some of the cookies, please refer to the cookie policy in our Legal Mentions page. By closing this banner, scrolling this page, clicking a link or continuing to browse otherwise, you agree to the use of cookies.Ok