This term refers to the people who lived in Norh America continent before Extensive European colonization, that began with Christopher Colombus expedition in 1492.

We also use the terms “American Indians”, “Amerindians” … Not to confound with Indians (in fact you know that Christopher Colombus thought he has arrived in India … but not really …)

So in our new gallery called “Native American coloring pages”, you will find exclusive contents, coming from : 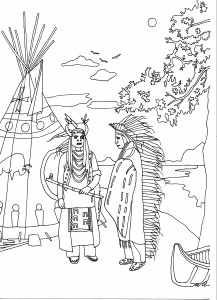 Now you can discover all these new illustrations based on the thematic of American Indians : you can download, print and color these exclusive, original and high quality contents for free !